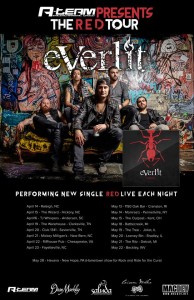 This April and May we’re hitting the road to support our single release R.E.D. As always we’re excited to get out and play our music for all you awesome people! Check out our route list and mark your calendars. See you soon!! 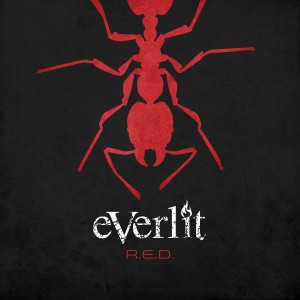 We couldn’t be more excited to officially announce that our new single “R.E.D.” will be released to you on April 15th! It’s another Everlit and Taylor Larson combo you’re not gonna wanna miss!! 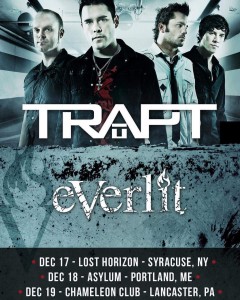 Just announced! We’ll be live with Trapt for three nights only from 12/17 – 12/19. Come check out these amazing shows! More details in our tour dates section. See you there!

We had a blast hanging out with Kelly Hudson of the Fuze Magazine. Read her recap of what we did during her time here in Philadelphia and then watch the full interview here!

Our guitarist Jordan sat down with Alternative Addiction to chat about our latest EP “Renovate, our history, and what’s still to come. Read the full story here! 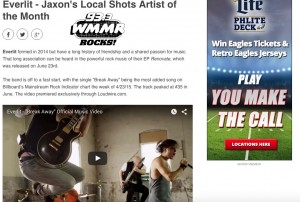 We’re more than stoked to announce to our home town that we’ve been named WMMR’s artist of the month. WMMR is Philadelphia’s largest rock station so it’s an honor to be a part of it. Check out our page on their website and tune in all October long to catch Everlit tracks from our debut EP “Renovate”! 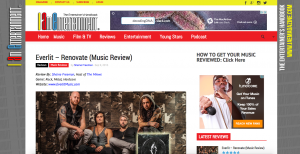 We’re proud to share the latest review of our debut EP “Renovate” with you! It was written by Shaine Freeman of I Am Entertainment and The Miews who was once a Philly guy. Read the full review here and then compare the review to your thoughts of the EP! 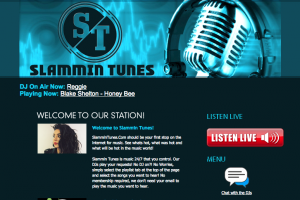 We’re excited to announce that Everlit has been added to regular rotation on Slammintunes.com! Tune into the stations featuring DJ Sexxy and DJ DaddyZ to hear local, upcoming, and current rock and blues hits!

Slammintunes.com is an internet station station with DJ’s around the world.  Check out the interactive chat for listener’s who wish to participate.  They can talk with the DJ’s on air along with other guests!  Slammintunes.com also offers an app for iPhone and Android so download and listen today!

Our rhythm guitarist Jordan was given the opportunity to review the latest P.O.D. album on the Revelator website. Check out what he had to say!

I’m going to start by saying I was excited for a new P.O.D. release already so to have Revelator give me the opportunity to review it is awesome.  I’ve been following P.O.D.since I was a kid. The music they were putting out with the Fundamental Elements of Southtown, Satellite, Payable of Death, and even their even earlier stuff like Snuff the Punk were big influences on the music I brought to the table as a kid in a high school band. With that said, yes, this review might be slightly biased since I’m already a fan but here’s the verdict . . . The only thing this album is missing is Sonny’s dreads. 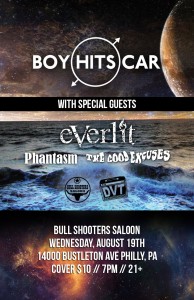 We’re super amped up to announce that we’ll be performing live with Boy Hits Car at Bull Shooters Saloon next week! If you live near the Philly area make sure to come out and hang with us! Click the link for show details: https://www.facebook.com/events/867261300010015/